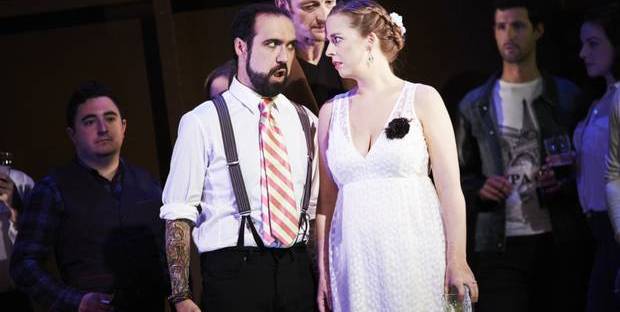 Roddy Doyle’s new translation of Don Giovanni with Opera Theatre Company and the RTE Concert Orchestra was a huge success – one of those rare shows where there is no weak link in the cast and a positive atmosphere throughout. A real joy to work on. Such a relief that the critics enjoyed it too!

The Irish Times gave us 4 stars:

Roddy Doyle’s translation is sharp, singable and to the point

There was approval elsewhere too. Bachtrack had this to say about my performance:

Alexander Sprague and Daire Halpin both stood out equally for faithfulness to the original.

Halpin was a delightful Zerlina, whose not huge voice was widely compensated by her perfect execution.

My performance did not go unnoticed by the Independent either:

Goldenplec had the following to say:

Daire Halpin and Brendan Collins make for a believable Zerlina and Masetto, with Halpin’s singing of the aria ‘Vedrai carino’ a particular highlight, reaching the emotional heart of the story without losing her sense of humour.

The Arts Review also enjoyed my singing as well as that of the other extremely talented cast members:

All in all, a truly delightful show and a wonderful cast. Thanks to all who made it possible especially Fergus Shiel and those hard at work in Opera Theatre Company!